Why is Accountability Important in the Workplace? Accountable Leadership 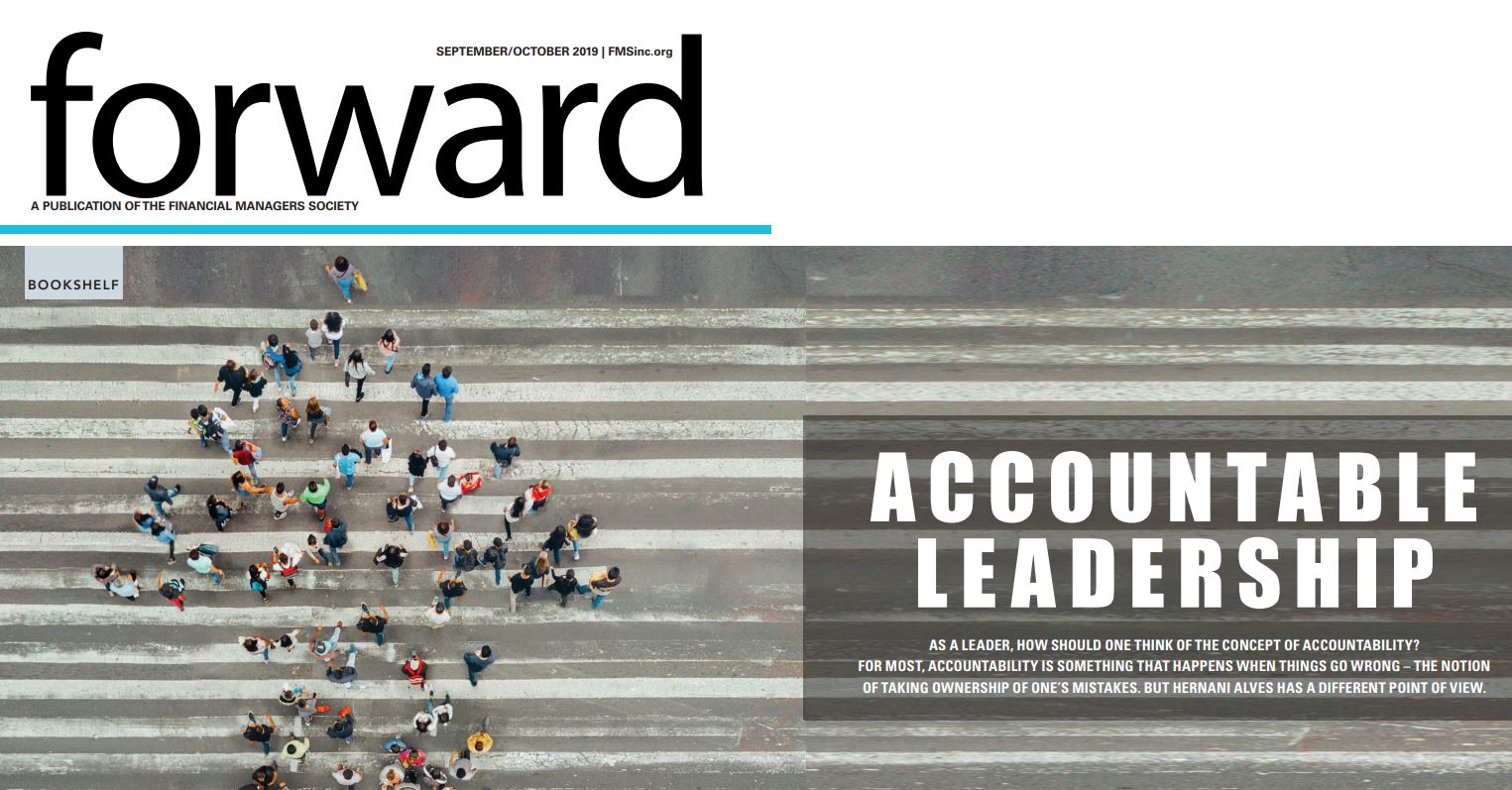 Why is Accountability Important in the Workplace? Accountable Leadership.  As a leader, how should one think of the concept of accountability?  For most accountability is something that happens when things go wrong.  The notion of taking ownership of one’s mistakes.  But Hernani Alves has a different point of view.

By Forward, a publication of the Financial Managers Society    FMSinc.org | 800-ASK-4

“If you have high turnover on your team, or your employees are regularly not hitting their goals, or just aren’t engaged, it’s because you’re not harnessing the power of effective accountability in your leadership,” Alves, an author and management expert, explains.

“It really is the crux of workplace problems, both big and small.” Alves spent over twenty years as an executive at a $3-billlion company and now works as a consultant with major clients. His passion is spreading the word about balanced accountability – and how it can help transform organizations.

Alves spent over twenty years as an executive at a $3-billlion company and now works as a consultant with major clients. His passion is spreading the word about balanced accountability – and how it can help transform organizations.

For Alves, the journey toward balanced accountability began at the latter extreme. When he was first promoted to management, he micromanaged his team – and got positive results doing so.

“My team was getting bonuses, we were getting awards – we were on top of the world,” he recalls. “But my manager told me that my team didn’t want to work with me anymore.”

Surprised and hurt, Alves began making changes that eventually informed his entire approach toward leadership with a strategy he calls the Three P’s of Accountability.

The first step Alves asks leaders to take is one of personal accountability.

“Personal accountability is the most important and challenging aspect of this program. It’s important because, although it may not always feel like it, your employees want to follow you. Just as your kid will mimic you, employees will copy you too. It’s just human nature.”

“We have to be hard and honest with ourselves,” Alves says. “We discover how to lead by changing how we think and act.”

Leaders who take personal accountability seriously and have the self-awareness to know when they’ve made a mistake are leaders employees can trust. For example, demanding that employees arrive on time then personally showing up late every day is a surefire way to sow discord and resentment. Only by being honest with oneself and acting as an example to one’s team can a leader find true success.

Positivity is a key element of strong leadership, but it’s one that many leaders shy away from. After all, it sounds a little fluffy.

“Positivity may seem like a soft subject, but it’s essential to improving your bottom line and getting the results you want,” Alves says. “Research tells us negativity is contagious and can have a detrimental effect on the workplace.”

Positivity reduces stress and creates a more engaging atmosphere, but it’s not easy to stay cheerful when the stresses of the industry seem overwhelming. Even so, positive accountability isn’t about sugar-coating a bad situation.

“When you really embrace balanced accountability, it creates a culture where even when you’re not there, your employees are holding themselves accountable.”

“You owe it to your employees to tell them what they need to know, even when it’s not what they want to hear,” Alves explains. “It’s possible to do this and be positive at the same time, even if the message itself isn’t great. Whatever is appropriate to share, you should share honestly.”

“Sometimes these things seem unnatural to leaders who aren’t used to them, but they’re really powerful. Praising a team member in front of others or handing out thank you notes for specific actions – these are really effective tactics that cost nothing but a few minutes of your time.”

Holding employees responsible for meeting their performance goals is familiar to most leaders, but many do not couple discipline or performance reviews with coaching sessions.

“After leading more than five-thousand people, I’ve seen many seemingly obvious expectations become issues because they were not explicitly laid out,” Alves says. “When you hold someone accountable for their performance, don’t be afraid to communicate your expectations clearly. Employees actually love this. Even when conversations around this are difficult, employees still appreciate them.”

Sometimes when employees exhibit problem behaviors – such as tardiness, missed deadlines or poor communication skills – it’s baggage from a former workplace. All workers come from previous experiences that have created their own personal expectations. Leaders who beat around the bush rather than addressing these types of problems head-on are doing those employees a disservice.

“Once you embrace performance accountability, you’ll be able to set expectations from a new recruit’s first moments, and be confident in dealing with unexpected or even unforgivable behavior,” Alves says. “When you set expectations, you’re not just covering your butt and providing a paper trail for disciplinary actions further down the line. You’re engaging your employees and raising the standard of their work.”

PRIORITIZING ACCOUNTABILITY
Implementing these three principles of accountability may seem less important than filling key positions or managing major risk factors, but Alves argues that embracing them can actually help you with those pressing problems.

“I know it can feel overwhelming, particularly if your life is busy with challenging work situations,” he says. “High turnover, mediocre performance and poorly engaged employees might tempt you to shelve these ideas until things are quieter, but I actually believe that the Three Ps are what will get you to that quieter, more productive, less stressful place.”

Taking balanced accountability seriously means holding oneself and one’s employees to a higher standard, but using positivity and openness to do so.

“Before exploring accountability, I knew I needed a new approach to get the best from my employees,” Alves says. “When you really embrace balanced accountability, it creates a culture where even when you’re not there, your employees are holding themselves accountable.”

Hernani Alves is an Amazon best selling author, international speaker, and consultant with over twenty years of business experience as a Sales Executive for a $3 Billion Company. He’s the founder of Balanced IQ, a company that helps leaders build world-class teams focused on getting sustainable results in varying economic climates.

In his book, Balanced Accountability: Three Leadership Secrets to Win Hearts and Maximize Performance, Alves delivers a newfound clarity on the case for accountability and the steps organizations, and individuals need to take to unleash their potential. He reveals the frame work needed to improve accountability in the workplace to win hearts and maximize performance.

https://waterfallmagazine.com
I am regular reader, how are you everybody? This post posted
at this site is in fact fastidious.

http://wieliczko.eu Our WordPress plugin permits you to maximize all images
submitted to your service or blog site.